Can I Represent Myself in a Workers Compensation Claim?

Home » Can I Represent Myself in a Workers Compensation Claim? 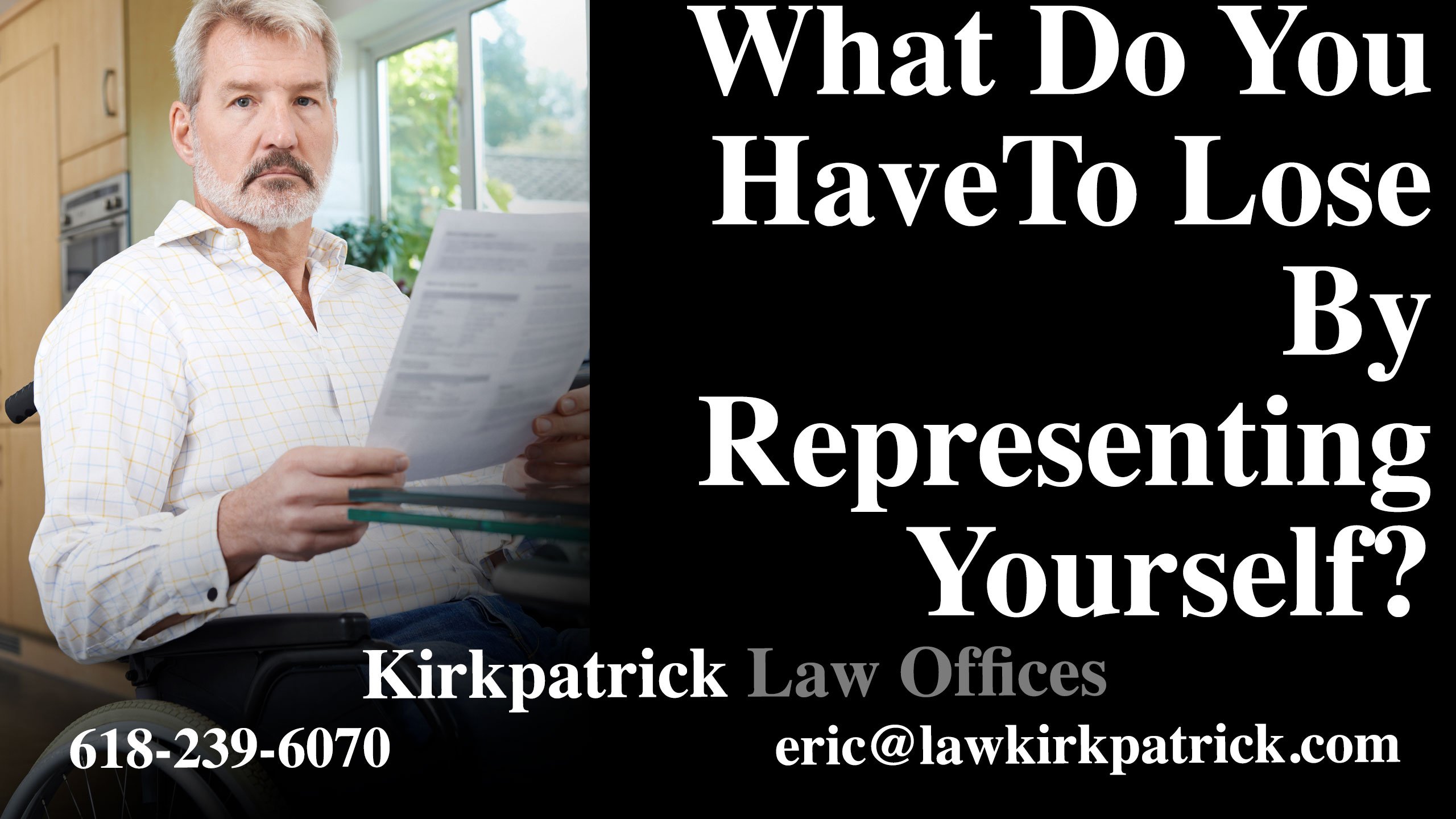 If it’s a very simple work related injury with a period of time where there was minimal time lost from work. In cases like these it might be okay to represent yourself.

On the other hand, I explained to people that there are certain pitfalls that they are liable to fall into if they don’t know where to look for them. What i wanted to talk to you about today was some of those pitfalls that you might come across. For those of you that have decided to pursue a workers compensation case on your own, I thought I might describe some of the pitfalls and things to look for.

Statute of Limitations for a Workers Compensation Claim

The statute of limitations refers to the period of time you have in which to actually file a workers compensation claim with the Illinois Workers Compensation Commission.

I bring this up because sometimes people think that giving notice to their employer or telling the employer that they have a work injury on or near the date of injury satisfies the statute of limitations. It does not. The statute of limitations is three years from the date of your accident or two years from the date that you last received a workers compensation benefit; whichever period of time is longer.

With that said this is a filing that needs to be made with the Illinois Workers Compensation Commission the document is called an Application for Adjustment of Claim.

If you don’t file your claim within the appropriate period of time your case will be forever barred and you won’t be able to recover anything. So, keep that in mind first and foremost.

Choice of A Doctor in a Workers Compensation Claim

Another pitfall that i see folks representing themselves on is that they don’t realize that the doctor the company sends them to isn’t the doctor that they have to treat with. A lot of folks think that if the insurance company sends them to a doctor to treat their injury or illness, that that’s that that doctor is going to be in their best interest and take care of them.

That would be the case in the perfect world, but it’s not generally true. These insurance companies know exactly what doctors to send an injured employee to with the idea that they’re going to lessen their obligation to pay you the benefits you are entitled to receive.

The reason I point this out is because if you are to pick a third doctor on your own then the insurance company the workers compensation insurance company doesn’t have to pay for that doctor.  So, to give you an example, if you go to a Dr. Jones and then you choose to go to Dr. Smith, those are your two choices of doctor.

If you go to Dr. Jones and he refers you to Dr. Smith and Dr. Smith refers you to another doctor, that still only counts as one choice, because the other two doctors are in the chain of referral for your health care.

The problem with people not understanding this is that oftentimes the insurance company sends you to a doctor that they want you to see and then the client finds himself painted into a corner. The doctor has treated the person for six months, their symptoms continue and then all of a sudden the doctor decides there’s nothing wrong with them and sends them back to work too early and then they have to start all over with legitimate medical treatment.

Another pitfall that folks representing themselves should look out for is to make sure that the benefit you’re receiving during the time that you’re unable to work is equal to two-thirds of your gross average weekly wage. This means your wages before taxes are taken out. Now,  the insurance company will a lot of times tell you that overtime is not to be included, but that’s not necessarily the case. Your overtime earnings can be included if you worked overtime on a regular and continuous basis or and that’s significant or if the overtime was mandatory.

Sometimes the insurance companies will tell people even me that it’s not that the overtime is not to be included because of the it’s overtime and not part of the wages.

That’s not true. It matters if it’s regularly worked which for example would be more than 50 percent of the time during the period of time you’ve worked for the employer over the last year or less. Of course mandatory means mandatory: The employer requires you to work it.

The thing about this is it’s the overtime hours that are included but it’s calculated at your regular rate of pay; your regular hourly rate instead of including your double time or time and a half pay.

Probably the biggest pitfall that i see is that people assume sometimes that there’s a book or some kind of chart that we lawyers go to and they’re everybody’s going to get the same amount for whatever injury it is that they have.

Knowing the Value of Your Workers Compensation Claim

For example that they they believe that we go to a book that shows for knee surgery that it’s going to pay so much money, and that’s not the case at all.

The value of a case is dependent on what the commission arbitrators or Workers Compensation Board have determined on similar cases for years – sometimes over 100 years or more. And this goes back to cases that have been arbitrated and appealed to the commission to the circuit court, to the appellate court and so on.

The value of the case is different for everybody even if it’s the same injury because most people don’t work at the same number of hours and the same rate of pay as their friend or co-worker who might have the same injury. Plus, you have to take into account the fact that workers compensation has its own system of percentage of loss, generally speaking, versus true dollar figures.

So the point being, the insurance companies know what these cases are worth. They understand the ins and outs of the claims process The insurance companies also have an interest that is completely opposite yours and that is they want to save their money while minimizing what they pay to you. Things can also get complicated with long-term causal factors to your health problem. Occupational diseases, unlike slip and fall injuries, often manifest themselves over a longer period of time with complicating factors.

Sometimes it’s okay for you to represent yourself it’s just there are certain pitfalls that people aren’t aware of if you have any questions about any of these issues i’ve mentioned feel free to give me a call and if you don’t choose me as a lawyer, make sure that you do give consideration to hiring a lawyer that is well versed in the laws of the Workers Compensation Act. A workers compensation attorney can make a big difference in the outcome of your case.

If you would like to discuss your case with the most responsive workers comp lawyer St Clair County has to offer, call my office at: (618) 239-6070